In February, coming from SOGENA associated with the Promaritime INTL group, I joined PROMARITIME as part of the regrouping of the Africa activity. I have the will to invest myself in this development project. Energy, stubborn and persevering seems to me to be the elements of my character. I received a very good integration within the company.

Coming from the maritime services activity for oil tankers, I am joining Promaritime International to develop in much more varied fields. Arrived in February in a climate of health crisis, activity remains buoyant. The personality of the group leaders very quickly convinced me to join the PROMARITIME group.

I come from the export import area of ​​EURO TRANSIT. I joined the PROMARITIME Roissy Tremblay group since March 16. Despite the difficult crisis situation, I have already benefited from good advice & very good support.

Coming from SOGENA LPO Conakry, I joined the PROMARITIME intl group in January. Partner in the process of the group's presence in Guinea. I have a very good impression in the cohesion of the group and the people who are interfacing in Rouen. 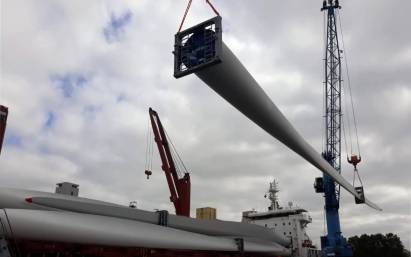 For the first time, 18 blades of 74 meters length have passed through Port of Rouen last week!! They have been discharged ex M/V Sloman Discharger at Terminal Forestier. All…