Flag ship of the German company ENERCON, third worldwide windmill manufacturer, the Group’s owned unit  « E-SHIP-1» has been operated at the Agency of PROMARITIME INTERNATIONAL SAS, when she called the port of ROUEN.

Launched in 2014, the RO/LO ship equipped with a stern ramp, two underdecks, and served by two cranes of 80/120 tons, is a real floating event when she  is steaming up the river Seine.

130 m long and 10.500 net tonnage, the vessel is equipped with 4 rotors. The rotors – 27 m hight and 4m diameter – are geared with the propellers that allow the movements of the steel sails.

The sails help moving the ship with extra power due to the “Magnus effect”. The saving on the bunkers can reach up to 25 %.

Fully loaded in Emden, the ship has partly discharged in Rouen, unloading 80 pieces of windmills,are planned a next call at Leixoes, and final trip crossing over the Atlantic to Montevideo, Uruguay.

We wish good sailing to the « E-SHIP-1», top Lady of the flourishing Windmill industry. 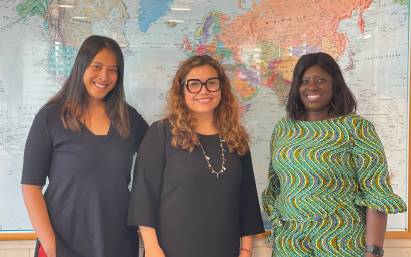 Welcome to Servane, Laura and Mariam ! We hope that our new recruits from Rouen will flourish fully within our company.